While Beach House covers a lot of interesting things that make me happy - including great modern design, great beef stew and great Long Island sunsets, the wonderfully dry-witted, smart and sassy modernemama recently tagged me to share six uninteresting things that make me happy.
It's taken me awhile to fulfill the assignment, but better late than never. Here are my six: 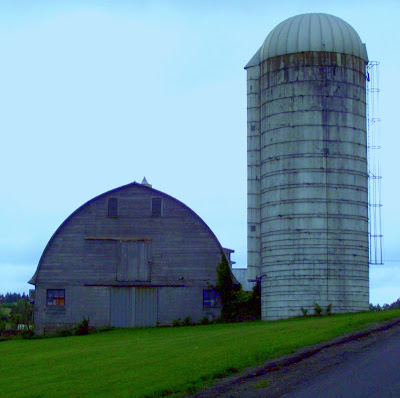 The Roberts' Farm. Those who opt for the East End of Long Island as their weekend getaway may look to Stargazer as a sign that they're entering the Hamptons, but for me, it's the Roberts' barn and accompanying silo that serve as that innocuous indication that "we're almost there!" To our happy place just down the road, that is. 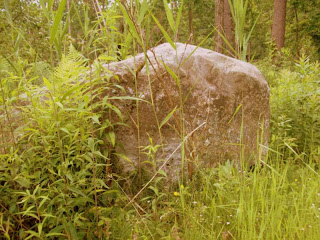 I've always been fascinated by Stonehenge and most recently, the dolmens and stone circles of Ireland. So much so that I plan to build my own stone circle in our garden at some point with this otherwise uninteresting backyard boulder to serve as the keystone. 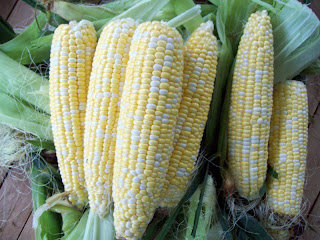 As a kid at summer camp, fresh corn was a once a week treat, but with 500 ears that needed shucking, we needed a little bribing to get the job done. I was always that ready volunteer who helped peel back husks in exchange for an ice-pop, and the satisfaction in knowing that to-die-for sweet corn would soon follow from a nearby Vermont farm. Since then, shucking corn always brings me back to that wonderful time and place.

To be honest, it's a bit embarrassing to admit that I've recently gotten into a bit of bird-watching. But with chickadees, woodpeckers, hummingbirds and wild turkeys floating through our yard day in and out, it's kind of fun for a Citiot like me to match up the birds in the yard with the birds in the book. Next up, trainspotting? 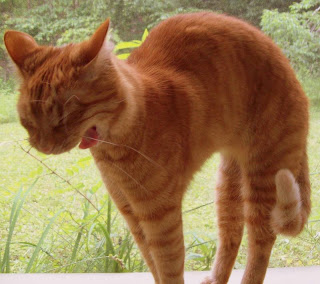 After a round of bird-watching, there's nothing like a little country cat nap (but I'll spare you those images). ;-) 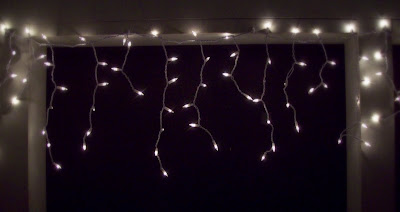 Even after a summer of renovation work on the house, we have nothing to show for it when it comes to our 18' x 18' concrete slab porch. That is, except when it comes to these white trash lights. Not only do they provide ambient light for dining, but afterwards we can push back the table and chairs and turn the entire space into an outdoor dance floor...And those who know me, know that I'm NOT kidding.


Now I'm supposed to tag other victims to share their six uninteresting things that make you happy. After which choose another six people to tag and link your post on back here.
Posted by Christine H. at 6:24 PM 1 comment:

At War With My Musk Thistle

Above: A six-foot stalk of musk thistle,
surrounded by baby thistles.

It's been two weeks since our friend Dave stopped by for dinner, and following a walk around our "garden," he pointed out to me that the front "lawn" area had been taken over by the noxious weed called Musk Thistle. Apparently this tough, prickly stalk-like plant could take over the lawn, crowd out real flowers and other plant growth and generally make it impossible to walk barefoot in one's own grass (and that's really what any Citiot really wants to do at their country place).

Looking around and thinking he might be over-stating any real cause for concern, I realized that we were actually surrounded by hundreds (hundreds!!) of these plants. They were everywhere, hiding in plain sight. Suddenly I felt like my lawn had been invaded by alien beings and needed to be stopped....immediately.

Nothing like a round of Googling to make make me seriously hysterical about whatever situation I'm facing (whether it's an invasion of musk thistle or a papercut that might lead to lockjaw, I'm always convinced I'm gonna die) and put getting rid of my musk thistle problem at the top of my list of things to get obsessive-compulsive about.

Within hours, I learned that musk thistle weevils would be the easiest and most biologically-correct way to control my musk thistle problem. Then thinking that I could spend 25 bucks for a box of weevils to be delivered to my door via Fed Ex, I made a few weevil jokes, then logged onto to e-bay, amazon.com and a couple of gardening web sites to take care of business.

But it wasn't as simple as just throwing money at the problem and releasing a few bugs into the yard. Poking around and not seeing any weevils for sale, I finally read the fine print on various State thistle-control web sites (Kansas, Missouri, Idaho and Colorado are active users of weevils for thistle control) and learned that weevils could only be obtained through the Federal government to State agencies. Hmmmm... 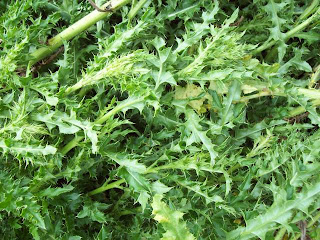 Musk Thistle Close Up.
So the next option was to mow down the thistle. But mowing thistle would require mowing down all the other, less invasive weeds, that make our garden actually look like a garden, so I took out my pruning shears and set to work -- snipping each musk thistle stalk that I could find, one by one. I snipped stalks both large and small at their base and gathered them together to clear the land. In the end, I gathered about 4 large wheelbarrows full of musk thistle stalks (in about a 1/8 acre section of land). 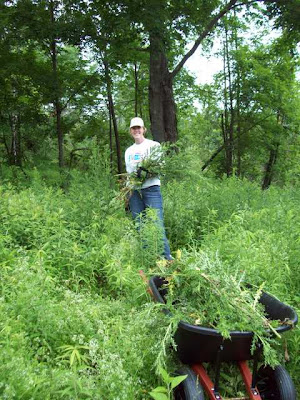 Above: Winner of this Years' Miss Musk Thistle Pageant.
According to the folks on the Internet, I'm now supposed to either set my pile of musk thistle on fire (which I'm scared to do) or cover it with black plastic so that it suffocates and dies without blooming -- though I still run the risk of the seeds getting planted and turning our gravel driveway into a hazard area for tire punctures next spring. Step two, apparently, will come this fall, when I'll have to use pesticide to kill off any re-growth before the winter. I'm not sure I want to go this route (see 'It's Not Easy Going Green), I'm just going to see how strong they come back over the summer.

Anyway, I'm taking the rest of the day off after the thistle attack. I read that what makes musk thistle "noxious" is that it can cause severe hayfever symptoms for people -- which is definitely what John has been dealing with here for awhile (though again, this could be a Google-effect -- the grass and tree pollen counts are off the charts right now, too). But to be honest, I feel a bit wheezy and itchy and I now completely understand why the Vikings put up such a fuss when faced with this menace as they invaded Scotland. 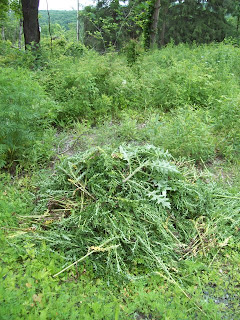 Above: My musk thistle pile, ready for weevils.
Posted by Christine H. at 4:09 PM 2 comments: 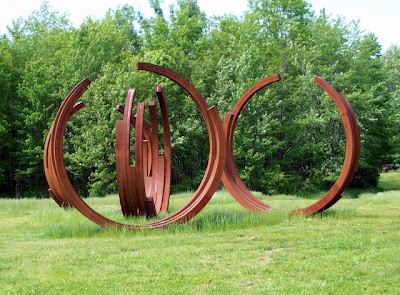 Over Memorial Day weekend, my good friends Jean, Lesley and Peter came up for a visit. While Peter was summoned to take John to Catskill to pick up a new chainsaw, I suggested to the ladies that we go get ourselves a little "cultcha," and take a visit to The Fields Sculpture Park in nearby Omi.

All was going well when we arrived. I parked the big, honking SUV just next to the space reserved for "eco-efficient vehicles" and Jean managed to go to the loo without dousing herself by accidently turning on the random knob coming out of the wall that she didn't realize led to a showerhead (she thought it was an art installation). Then we grabbed a map from the LEED visitor center and looking out upon the vast greens, decided to lube up with some insect repellent to keep the ticks away.

Thinking we had taken all precautions, out we went, across the field, feeling all arty and stuff. But it wasn't long before Jean began swatting the air, as if having an epileptic fit.
"Are you having the same problem," she asked.

But since I wasn't flailing about, I wasn't quite sure what she meant.

Are you sure the bugs aren't getting you?

Stop laughing, these bugs are annoying.

But bugs there were, and when the breeze stopped, there were tons of them. Well, tons if you're a Citiot, like us. So we tried to hang in there, with Jean swatting in misery, and me taking pictures of her, doubled-over laughing, and then decided to hell with it, who needs culture when there's a Dairy Queen nearby.

Which goes to show ya, bad things happen when you leave Manhattan, but there's always room for ice cream.
Posted by Christine H. at 6:20 PM No comments:

It's Not Easy Going Green

Nothing says "I love you" more than when a guy buys his wife a composter for her birthday. So when hubby presented me with my very own Thermoquick Express 410 to celebrate another year of living, as I'm sure you all could imagine, I was rendered...speechless.

Seriously though, this is our first full summer in the house, and aside from all the floods, clean-up of fallen trees and infestation of carpenter bees, we're eager to embrace the full country living experience. Trying to be more "green" is a big part of that (nevermind our recent use of pesticides and florocarbons to kill said bees as well as the newly found noxious weeds -- but I''m getting ahead of myself).

As I stood in stunned birthday silence, John quickly assembled the composter and I read the directions, which were a treat:

With compost bins from Remapla, you will get very quickly an effort, if you place the composter at an half-shady place, where the air can ventilate easily. (Okay, I think I got that.) The compost bin must have direct contact to the soil to let invade micro-organisms, insects, larvae and worms. (The area seems to be suddenly popular with squirrels and chipmunks as well.) Do not place the composter to close to the property of your neighbour; a distance of 20 inch might be enough (then again, it might not).

It's been about six weeks since my hopes for a diamond tennis bracelet were dashed, er, I mean since the composter has been in place, and things do appear to be happening. Weeds are wilting and onion skins seem to be decomposing...

But beyond helping me determine what the difference is between diamonds and decomposition, the composter has really given John and me a reason to take a look at our diet. In the daily peering down the compost shoot so to speak, the items we seem to be most composting are coffee grinds, onions and egg shells (we can't compost the accompanying bacon).

Also, we can't compost our cocktail garnishes such as lemon and lime (the rinds are dyed so not good for the "humus") and it turns out we're taking chances in trying to compost potato skins (apparently the skins often have pesticides lingering on them) so there's little to feel good about there. (And for the record, we eat a lot of potatoes. A lot.) But our worst offense seems to be the organic salad greens we never seem to get around to eating. Seriously, it's kind of embarrassing to take an unopened (un-recycleable) box of mesclun and walk it directly to the compost -- but at least nobody's watching. Nobody except that damn squirrel.

Suddenly I'm having serious thoughts about going macro-biotic, or at least buying a copy of "In Defense of Food," so one of my new goals this summer is to look for ways to add more compost-ables to our menu. Fresh corn, local tomatoes and even kale are just several items I'm on the lookout for at the farmer's market.

I'll keep you (com)posted on the outcome. 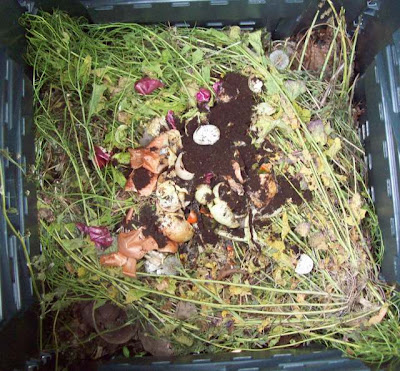 Above: A peek into our composter...and our diet.
Posted by Christine H. at 4:52 PM No comments: