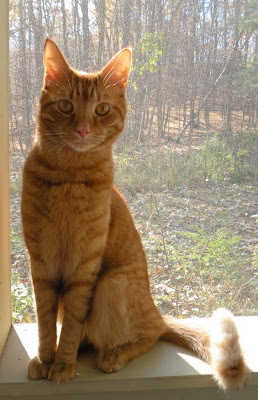 This is Mido (Mee-doh), the coolest cat in the world. I know, I know, just like any parent, I think Mido is not only gorgeous (seriously - look at him), he's brilliant. Like if they had a Mensa club for cats, he'd belong. He'd go to the kitty version of Cornell. Oh, and did I mention that he's crazy affectionate too?

Anyway, he really loves hanging out on the porch at the house and even though he's squeamish about getting into his little Sherpa bag to go Upstate, once he's in the car, he's great, totally naps the whole way.

Mido "owns" the porch. At first I thought the porch was mine, but no, it's really his. He sits there watching wildlife (more on that later): bees, squirrels, chipmunks do their thing without having to engage -- kind of like watching a movie.

Anyway, part of the reno work on the house included installing a cat flap for the little guy so that he could romp around out there all day and night without us freezing to death (it was a bit tough going last winter with that). Here's a video of him going through the cat flap (in case you're at all curious). He's getting much better at it now -- and hell, he's got a nice cat butt as well -- if I do say so myself. 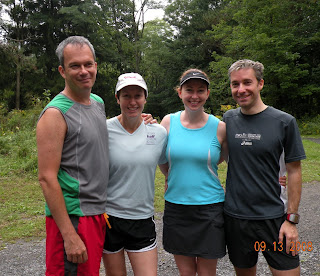 So while I haven't apologized for the gaff of making them run up and down the hills that surround us, I know now that if it didn't kill them (nor did that bobcat they spotted on their run), hopefully it made them stronger for their 26.2 tomorrow in NYC.
Good luck guys!
Posted by Christine H. at 6:12 PM No comments: