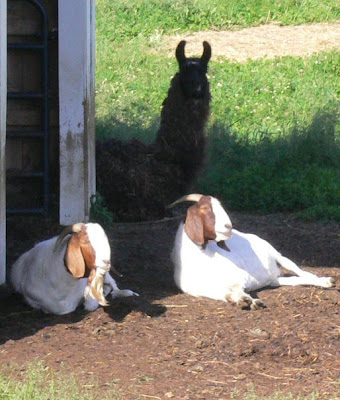 So, we learned that the Guard Llama at Dave's farm died just before Labor Day weekend. We were all very sad. As much as we liked to feed the goats, check on the pigs and try to determine the difference between a chicken and rooster (hey, we're city folk), we really LOVED the llama.

That's probably because of the way he protected the sheep and the goats. We'd be feeding the little beasts a bit of grass, and the llama would quietly approach (he was probably eight feet tall) and just stand there keeping an eye on us, making sure our grass feeding didn't get out of hand.

Anyway, so the llama seemed to have just taken ill -- and then died. The farmer found him in the grass laying down one day, and the next next day...llama heaven. (Or at least we hope.)

Llamas do seem to be growing in popularity in the Hudson Valley. But they're not cheap. A "cheap" llama is probably about $700, but they range up to about $10K. If you're in the market, they are a great way to protect your sheep and goats from coyotes, which have become more and more prevalent in the area (not to mention the catamounts). For a web site on purchasing llamas, click here.