All That and a Bag of Chips

Some people hoard paper towels, others hoard chicken breast that they get on sale and freeze for years. Me? Potato chips. I don't what it is, but any time I walk into the supermarket, I can't seem to get it through my head that we have PLENTY of potato chips (of many varieties!) at the ready to accompany most any type of sandwich. 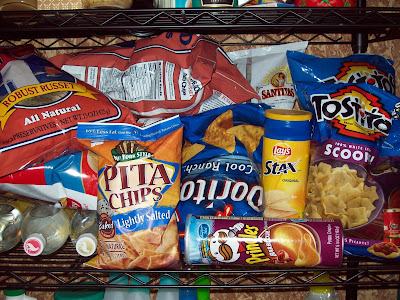 I'll be entering potato chip rehab shortly, but let me just check up on my cheese collection first.
Posted by Christine H. at 1:48 PM 3 comments: 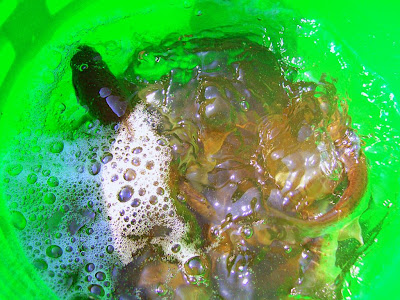 It's been a year of waiting for today. Last Spring, our friend Farmer Dave told John and me that he volunteers with the state to help replenish the local streams with trout from the New York State Fish Hatchery. Curiosity got the better of me, and a few weeks ago I called Dave to let him know I'd like to help out.

So this morning he picked me up in his truck and we went down to Livingston, where we met up with about 30 or so other volunteers waiting for the fish truck to show. Standing around in the KwikMart parking lot, I was introduced to Austin, our youngest volunteer of just shy of three years of age; John, a WW II Veteran and Pearl Harbor survivor and Barb, a local transvestite who used to go by the name of Burt (talk about local color!).

Soon enough, Greg from the fish hatchery arrived with about 8,600 fish (all one year old) from Rome and Van Hornsville, NY that would be dispersed into various sections of the Roeliff-Jansen Kill River (better known as the Roe-Jan). 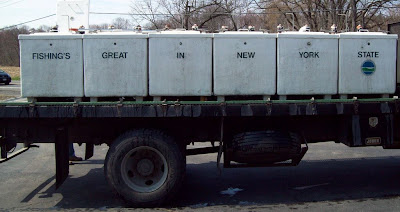 It was Swiss precision in terms of the work (minus the few fish that jumped out of the buckets here and there - not to worry, all were saved). We did about 15 stops in all, with Dave and John escorting a small caravan of trucks and cars. In some spots, Greg was able to just dump the fish from the truck, and in others we hauled the fish from the truck to the river in 30 gallon pails. 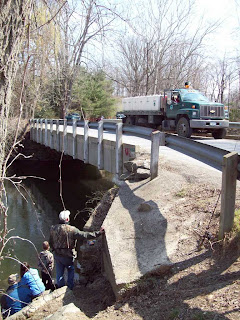 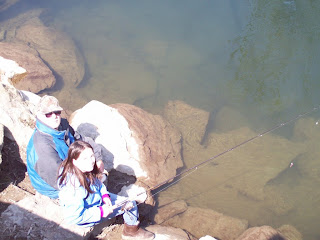 Surprisingly, at almost each stop we made, we were welcomed by eager trout-fishers, which didn't seem all that fair to me. I mean, I would say the trout should get anywhere from a five-minute to 24 hour head start before being allowed to be lured onto a line. But maybe that's what the local game warden was trying to help out with, as he tailed along checking on fishing licenses, etc. Trout season starts on April 1 in New York and more information about trout stocking can be found here.

Below, some more photos from the day. The next drop is next Thursday, with probably about 4-5 more to follow (dates TBD). 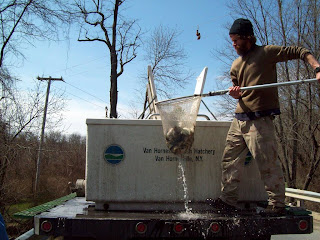 Left: Greg with a netful of trout. 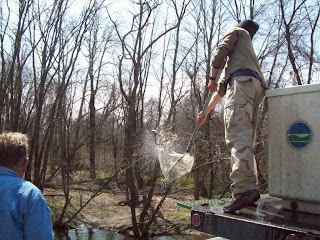 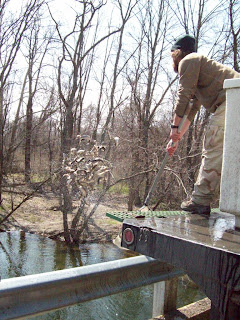 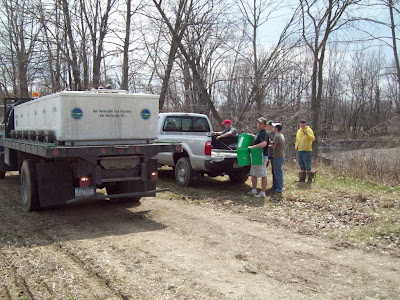 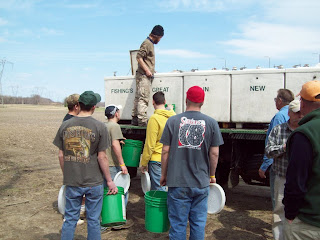 Above: Volunteers wait for a pailful of fish. 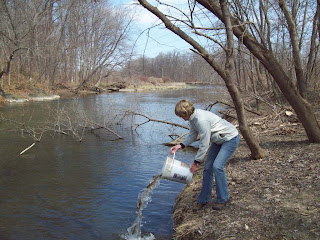 Above: Me, novice trout releaser in action. Below: FISHIES in the wild! 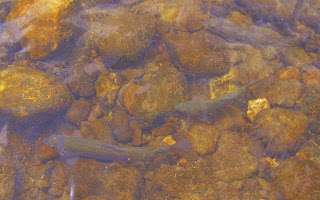 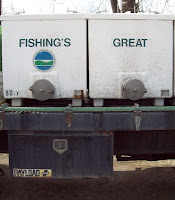