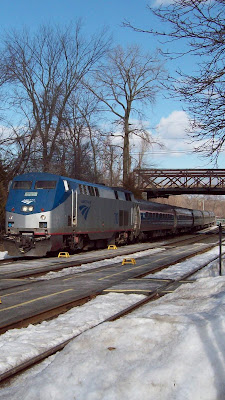 I just booked my train ticket for the weekend, which reminded me that I need to share a bit of my husband's trainspotting tendencies... I mean brilliance, when it comes to taking the train from the Hudson Valley.

Most of the time when I take the train it's from NYC to the big HV. There are two options: MetroNorth, which will get me to Wassiac for about 13 bucks (and cost John about 1 1/4 hours in round-trip drive time...blah), or Amtrak, which will get me to Hudson (and cost John 30 minutes in total drive time, AND get us closer to the Red Dot) for $39 and change. Of course, that's if I go at a slightly "off peak" hour and use my AAA discount (booking three days in advance). Peak hours can be upwards of $60.

But despite the cost (which is exorbitant), it's the return trip from Upstate to NYC that seems to get the weekenders' panties all tied up in a knot.

And not even in terms of $$, but in train delays.

Besides "overhearing" tales of train delay horror by long time weekenders who have grown bored of the spectacular river views from the train car and prefer to bitch and moan about their last train slog back to The City, I've seen ranting status updates on Facebook of friends "stuck" waiting for a train (that was supposed to, eventually, get them to a plane). In the end, with hours of delay, they were just plain out of luck....vacation and other travel plans completely ruined.

I've only taken the train from North to South once, but John has the INSIDE SKINNY on how to avoid extensive delays with the infamously tardy track record of our national rail line, and here it is:

As one might imagine, trains which originate in Albany have a lot less train line to screw up on than say, the trains that originate in Montreal (Adirondack), Toronto (Maple Leaf) or even Rutland, Vt. (Ethan Allen "Express").

In doing a quick check on the Amtrak website, these seem to be the trains that are listed as Empire Service. But beware, as some of those trains originate in Niagara Falls...

See, anoraks have their uses...

Well, it's a relief to have that confirmed;-)