So, John and I went up to the house on Saturday to see how the painting was going. We really had the pressure on the paint guy Bob and his team, because we were working against the clock (and potential dust) of the flooring guy. But late-breaking news on Friday afternoon (4 p.m., mind you), was that our floor guy wasn't going to make it the following week as scheduled. He threw his back out (I can only hope that it was during the finals of a limbo contest) and was gonna be laid up for a while.
In the meantime, paint is progressing but probably not as much color as we'd have liked to have seen. As Bob explained, there's a ton of other little things like patching and skim-coating and priming and all that other fun stuff that had to take place first. Fine, fine, sounds good enough. But while at the house, it was so hot that I could only muster the energy to water the half-dead flowers while John set to work on his usual punch list of items that I have no idea how to help with (like electronic, temperature gauge kind of things). Then I stewed on the porch, in the heat, waiting for the opportunity to hit the nearby lake for an afternoon dip, as promised. (I swear, I'm like an 8 year-old sometimes).

Alas, when the time finally came to get the swimsuits on, we heard a crack of thunder. Pulling out my Crackberry, I quickly checked in with the Accuweather forecast and saw that a storm was coming our way. See below: 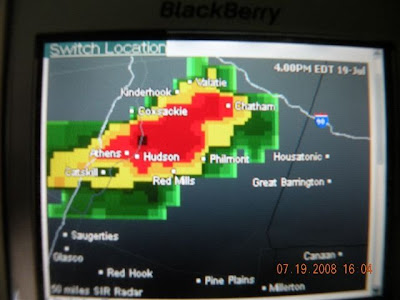 Grrr....this would all be rather funny, if this wasn't the second or third time this summer that my planned swim had been marred by foul weather, and was therefore probably the result of the "Curse of the Rainman," aka my husband John.

Now, I know you're all probably thinking that I'm being mean (and you're right, I am) when referring to John as The Rain Man, but as a bit of background, on our first vacation together, John took me -- not to a beach in the Caribbean, or to Europe to cycle under a Tuscan Sun, but to a rainforest. And a cold one at that -- in Washington State. Olympic National Park to be exact.

I should have known what I was getting into then, when I saw John in his element in the pouring rain, while I had the naivety to stop at some roadside gift shop to ask directions, in the downpour, to the rainforest.

Since then, John has taken me on several adventures of a lifetime. The beaches of Rio de Janerio, for instance, where it rained. The dry earth of Ayer's Rock (Uluru) in Australia, again, where it rained so hard that we were trudging knee deep through water with lightning all around. And since we were with German tourists I swore I would end up meeting my maker that day -- it always happens to the Germans, you know. And now, Lake Taghkanic State Park, all to be faced with a deluge of precipitation and thunderstorms.

Just look at him smiling behind the Crackberry here --
it's a good thing he's so damn sexy and fun to be around, even in the rain: 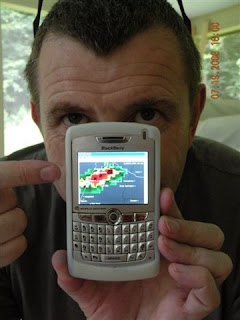 Eventually, the rain passed (in fact, I don't even think it affected the lake, I'm just being a drama queen), and we went down for a dip. Downright sultry was the weather report, and it delivered as I did my 15 minutes of frolicking, dried off and we went back to Jo-Jo's for a bit of ice-cream before heading back to the city.

In the meantime, we're waiting for a floor person to come in and work their magic, and also looking into how to take care of feral cats, as there have been several black cat sightings in the hood, and on our property, but no owner when we've asked around. I'm referring to Animal Kind's info on building a cat shelter and hope to have it up by next week pending another sighting. Will keep you posted on that!
Posted by Christine H. at 1:03 PM