Welcome to Just Off The Taconic, the blog about our little slice of heaven in the Hudson Valley (E. Taghkanic), Our House, and some of the things we do out and about in the area.

John (my wonderful husband and best friend in the whole wide world...) and I first saw The House last June. After a two-and-a-half year search for the perfect property in the region (that was within our budget, etc.), we closed last August. Soon after, we spent a week settling in -- and trying to survive without the comforts of a nearby bodega and automatic dishwasher. While we did OK without the bodega, we realized that we really couldn't survive without a dishwasher and decided to have "a little work" done on the place.

"A little work" originally included a new kitchen to make room for that badly-needed dishwasher, knocking down a wall to make the "main floor" an open plan, adding French doors to access the porch (not to mention a cat flap for Mido, our little orange wonder kitten), and possibly finishing out a basement area to make an extra guest bedroom (to turn it into a proper 3 BDRM home).

In January, we drove up the Taconic State Parkway in an eerie snow squall to find that the power line that led into the house had been compromised. Water had gotten into the electric line, corroded it and finally just disintegrated it, leaving us with a house that was more ice box than anything habitable. The good news was that we later found that the pipes didn't burst (nor the toilets, or anything really).

The bad news was that this delayed the reno work that we would later learn would also have to include a new heating system (due to do a dangerous electric heating system that had been put in when the house was built), new electrical wiring throughout (due to a hungry mouse nibbling on the wires) and some other stuff that, quite frankly, I've just blocked out, but which I hope John will detail in later posts.

In the meantime...to get us started...here are the "Before" photos for your viewing pleasure: 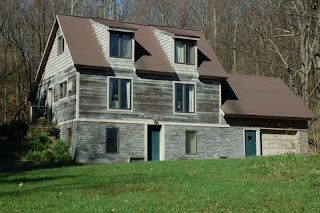 Above: The House. I believe this is from the realtor's page as it looks like early spring, when the house was listed in 2007. 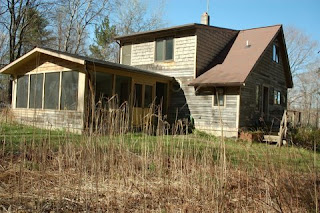 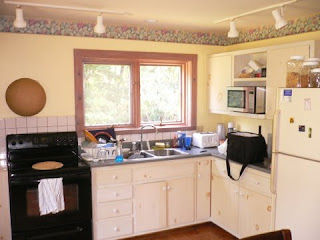 Above: Our kitchen, sans diswasher. 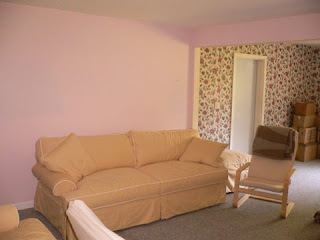 Above: Our living area...but we really couldn't manage living with that wallpaper. 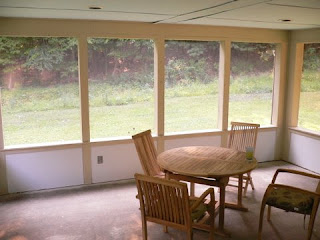 Above: Massive porch, interior.
Posted by Christine H. at 4:14 PM