Thursday night was like most nights for our Upstate getaways. I took my screenwriting class in the morning, and then hopped on a train from Penn Station to Hudson, NY. The weather was bad, seemingly getting worse, so I was worried about train delays, but pleasantly surprised when John met me at the station, the train arriving a few minutes early.
We hit up Price Chopper to lay in supplies given the weather, then headed home. I asked John, who was driving, if it felt like the roads were getting icy. Nope. Not yet anyway… Fast forward to a chicken roaster, a half a bottle of wine and at about 8:45 p.m. the lights when out.

Ever the Eagle Scout, John went into action, getting the flashlights together along with an assortment of plug-in hall lamps that illuminate when the power fails, as well as this huge back-up power strip that stays charged (and helped us continually recharge our cell phones and provided juice for our radio).

John checked in with National Grid via his Crackberry and they indicated that we’d be back up by 11:45 p.m. that night. Fair enough. Oops, make that 8:15 a.m. the site alerted us a bit later. Okay, we’re tough. We bundled up under the covers and cuddled up on the couch until around 11 p.m. and that’s when things started getting hairy…

It started with a cracking of a branch. Then another. And yet then another. All of a sudden, our secluded wooded setting that we always thought protected us seemed to be turning on us. A large crash and a rush to the bathroom window revealed a fallen pine tree that just missed the house…

At about 1 a.m. after we decided to go to sleep upstairs, another pine tree hit the roof of the house, startling us out of our sleep. We then realized we needed to take cover, too cold in the basement, so we took up refuge back on the living room couch as a cacophony of trees and limbs crumbling to the ground around us went on, and on, and on…until sometime around 4 a.m. as I can best recall.

John wonders how I managed to sleep through some of it. Survival tactic, I responded. In fact, sitting there in the dark, hearing the trees fall around us, thinking it was too dangerous to stay – and just as dangerous to leave, I just prayed that we got through the night with our lives. Thankfully, we did.

In the end, I’ve counted that on our small “just under an acre” slice of heaven, we lost about 30 trees. Twenty-five yards away on our neighbor’s property, the trees piled up as if loggers had moved in overnight and wiped the area clean, I’m guessing 75 or more that I can see with my bare eyes. On the other side, poplars fell over while the tops of the maples and hickory trees make is appear doubtful that they’ll make it 'til Spring.

Below, a few photos from the night. More on the aftermath in the next post. 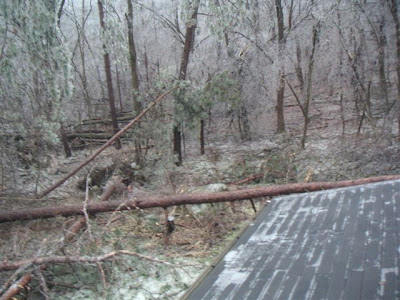 Above: A view out our top floor window into the backyard. 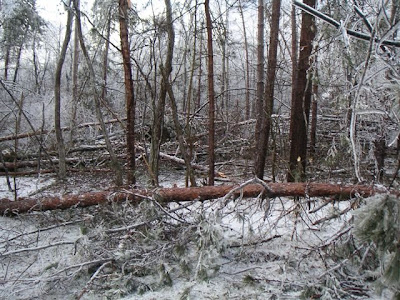 Above: A large pine in our backyard.
Below: More of the same from the side of our house. 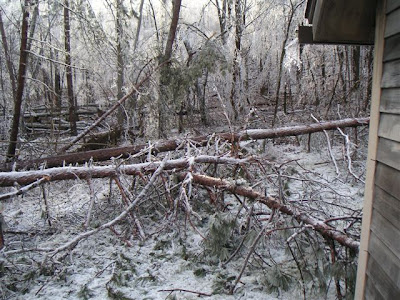 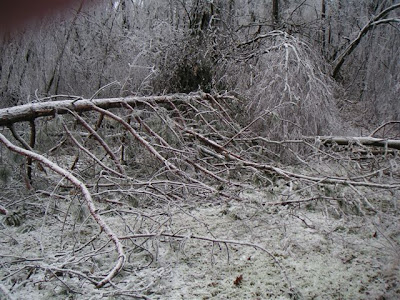 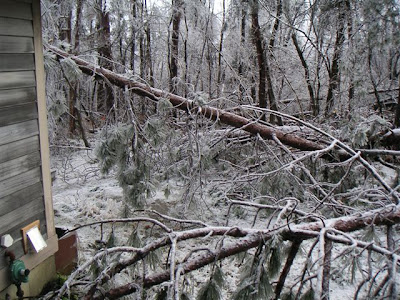 Below: The porch view. 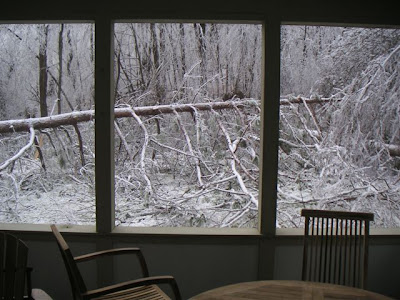 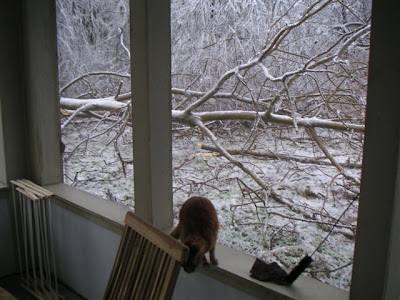 wow. what amazing coverage of the storm. I'm just happy that at the end of reading your blog posts, I get to a wonderful image of Mido the wonder cat.